Home > About Us > History 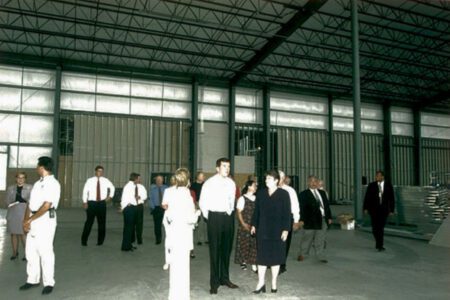 In June 1980, Greater Pittsburgh Community Food Bank opened its doors in Pittsburgh’s Hill District. The Food Bank came at a time of great change in southwestern Pennsylvania. The once-thriving steel industry, which had been in a slow, steady decline for nearly 30 years, began to rapidly deteriorate during the early 1980s. In January 1983, the region’s unemployment rate hit 18.2 percent leaving 212,000 people unemployed. The collapse of our region’s economy built on mills and mines devastated people who suddenly had no income, no way to pay their bills and no way to feed themselves or their families. The Food Bank was there to not only provide food assistance, but to help people get back on their feet.

Over the past 39 years, as the world of food assistance has evolved, the Food Bank has moved beyond emergency food assistance. Today, we work through a network of nearly 400 partner agencies (including smaller regional and rural food banks, food pantries, homeless shelters and senior centers) and seven Partner Distribution Organizations (PDOs) that support additional agencies throughout our 11-county service area (see map). In fiscal year 2019, the Food Bank network distributed more than 35 million meals.

In addition to sourcing, warehousing and distributing food, the Food Bank is actively engaged in confronting issues of chronic hunger, poor nutrition and health. Our work includes childhood anti-hunger initiatives, special distributions to seniors and other vulnerable populations, nutrition education, anti-hunger advocacy and capacity-building efforts throughout our agency network. We have significantly reduced the amount of highly processed food in our distribution system so we can make the consumption of healthy, nutritious foods more accessible. And, through our advocacy efforts, we have become a primary driver in comprehensive anti-hunger endeavors regionally, statewide and at the national level.

Subscribe to get the latest news from Greater Pittsburgh Community Food Bank.